Painting is Infinite 61 (Jupiter)
Original painting on canvas - inside the reverse of a canvas stretcher frame. In accordance with the Painting Is Infinite series, includes a miniature figure on the lower bar of the stretcher

Jupiter - king of the planets, almost like centre of a system within our own system (with it's moons which may support life). It is a familiar presence in the night sky, identifiable even in light-polluted regions. There is something existentially reassuring about it's presence. Also, the scale of Jupiter is a challenge to comprehend, for instance the well known storm spot alone is large enough to contain three Earths. 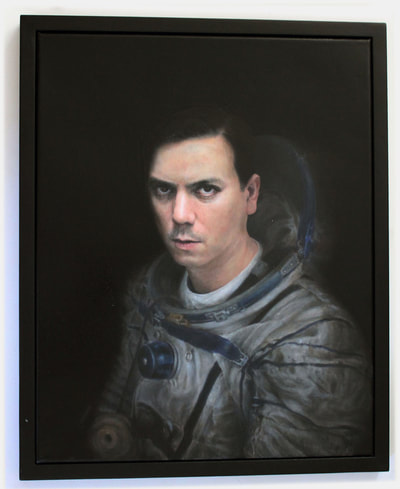 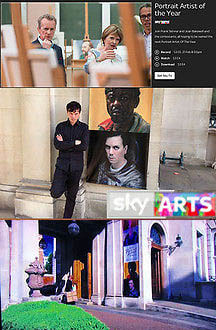 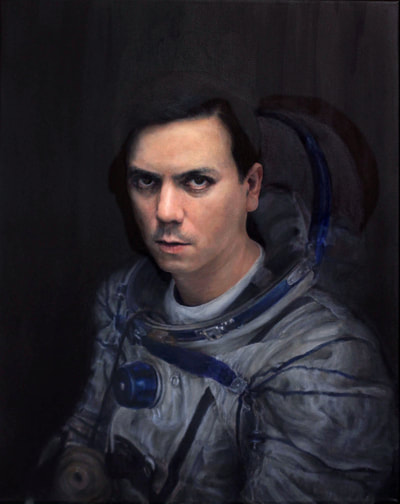 Portrait In A Borrowed Space-suit
Framed original painting in oil on canvas.

Photorealistic exploration in the field of portraiture.  The piece alludes to Multiverse Theory which postulates that there could be other universes besides our own, in which all the different choices you could have made in this life play out in alternate realities.
Self-Portrait In A Borrowed Spacesuit’ was one of the select few portraits displayed on the banners adorning the Wallace Collection, Mayfair, (London) for several months during the  filming of Sky Portrait Artist of the Year 2017 (Sky Arts TV),  The piece was also pre-selected for the prestigious BP Portrait Award.

To The Stars
Shards of vast intergalactic space combine, the pieces alludes to the multiverse theory. The multiverse is a hypothetical group of possibly infinite multiple universes including the universe in which we live. Together, these universes comprise everything that exists: the entirety of space, time, matter, energy, and the physical laws and constants that describe them.

0.35 BTC
​Bitcoin - the decentralized digital currency with  peer-to-peer transactions taking place between users directly, without an intermediary (i.e. the banks). Transactions are verified through the use of cryptography and recorded in a public distributed ledger called a blockchain. Bitcoin's ethos - it's revolutionary ideal of handing monetary transparency to the people is something to be admired.  'To the moon' and 'to the stars' are popular phrases amongst Bitcoiners with regards to the trajectory of the cryptocurrency.
​
​Get in touch for Bitcoin related sales enquiries:- info(at)davidom.com
Powered by